So, we here at Sporkbooking decided to bring back the Weee Fest for a couple days.  Why?  We know that there is so much good music in Austin, and we feel like we need to help completely over-saturate this city and represent the underrepresented once in awhile.   So Weee Fest is here to say:  “Hey, over here!  Here are some unknown performances ready to rock your world and expand your mind!”  Or something like that.  Last year, about this same time, we did these monthly shows at Skinny’s Bar (RIP)  This year, Frontier Bar (2421 Webberville Road)  is where we are hosting the resurgence of said shows, for who-knows-how long.   All we know is that, this time around, there’s TWO DAYS and ELEVEN BANDS on the lineup:

Ouiness 10PM – Improv on-the-spot insta band, just add theme.  You KNOW they will dress up like a chicken.  http://youtu.be/k3HaYp5eS1A

Destroyed For Comfort 12midnight  – All we can say is this is the greatest thing you are supposed to hate around.  https://soundcloud.com/destroyedforcomfort

ABGAL 1AM – New on the Austin scene, from their mad scientist lab in the sky, Abgal might take you on a vitural reality tour of their home planet, if you are lucky.  http://petroglyphmusic.bandcamp.com/album/unctioned-ziggurat-pherkad

Petkus Ono Band 9 PM – On the classier? side of improv – one of the only bands I personally know in Austin with a condcutor.  http://christopherpetkus.com/index2.htm

Cabrini Green 10 PM – Whoever gave him his trophy might consider taking it back.  Always able to get a crowd rioting…I mean started.
http://www.reverbnation.com/cabrinigreenuk

Pilgrimess 11 PM – There isn’t anything we can say about Pilgrimess that isn’t true.  Beautiful, Smart, and she paid us to say all this.
http://rebeccaramirez.bandcamp.com/

Null Hypothesis 12Midnight – The collaborative efforts of a Bradford Kinney and Mickey Delp, the electronic eyes and ears of a nation wait eagerly in anticipation of what they come up with.  Or at least a room of Austinites.   http://ghostofelectricity.bandcamp.com/ http://mickeydelp.com/

One of our most favoritest parts of this show is the diversity of the weirdness that can span Austin’s definitions.  From experimental, electronic, rock n roll, hip hop, and more, all can push the envelope enough to be “Weeeird enough” for this show.

Weee Fest is free, but the bands have merch so bring cash., and they are all broke so you can just like, give them money and stuff.  Comecelebrate our return, or else Aliens might come down and steal what brains you have left. 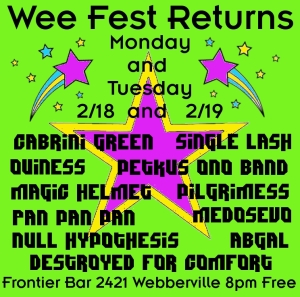 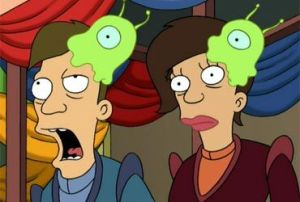 So, here is the newest project stuff coming from sporkbooking and friends:

That last project will be featured at the Bubbleface Breakout weekly at Club 1808 Wednesday, 1/19.  Go check it out!